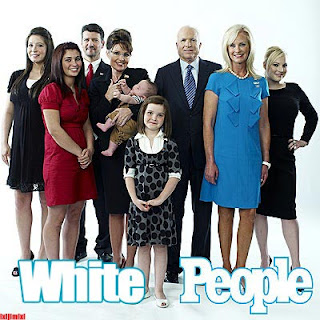 Not only am I a self-hating American, I'm also a self-hating white guy. And I am really white - English, Scottish, Irish and Swedish. There's a bit of Native American blood in there, but what annoyingly white person doesn't say that. White people have ruined America. Their general disregard for anything resembling cultural traditions, their mistrust of nearly every group, worldwide, that's not A) white, B) Protestant, or C) capitalist, and their general arrogance about American superiority has turned the country into the snotty prima donna of the world.

Think about it. White America ruins everything. I mean, how many fundamentalist, gun-toting, flag-waving, aggresively ignorant jerks do you know who aren't white. White Americans blow up abortion clinics, protest war-veteran funerals, sit in isolated cabins making bombs, chop up people and put said people in freezers for winter stews. White Americans revile soccer, are solely responsible for gentrification projects, and have pretty much ruined music and film by exploiting stereotypes of other races. Without white people, America might just be an alright place to live, but so long as we have a white majority, you can forget about improving a crippled education system or lessening environmental rape because, hell, white people love shitty education and raping the land - they practically invented both.

I mean, think about some of the biggest douchebags in the good ol' US of A: Glenn Beck, white. Michael Moore, white. Nancy Pelosi, white. Sean Hannity, white. Jeffrey Dahmer, white. Bill O'Reilly, white. Rush Linbaugh, white. Ben Rothlisberger, white. Granted, there are some major douchebags of color out there, but I'm pretty sure that if I think hard enough I can attribute their douchey-ness to white America (you know, would Jesse Jackson be such a douche if it weren't for white people? I don't think so).

That brings me to the real reason Americans - white Americans - suck so hard: their very real, albeit ridiculous, fear of brown people. Since the beginning of the European discovery of America, white folks on this continent have been incredibly fearful of anyone who isn't white. First, they brought diseases with them that wiped out 95% of indigenous peoples in the Americas- wiped them out in a span of about 100 years (1492-1608). Then, to really screw them over, the ancestors of future white Americans began a 300-year campaign of cheating, slaughtering and generally giving the shaft to the remainder of those indigenous groups. F'n A. But, destroying the cultures that were already here wasn't enough for these jack-offs. Nope. They went to another continent, rounded up hundreds of thousands of brown people living there, brought them over to America and THEN proceeded to shaft those people for about 300 years.

Finally, in the 1950s and 60s, some white folks (mostly Jews and Catholics, so they technically don't count as "white America"), realized that what was happening to black people in America really sucked and so decided to join up with some pretty-damn-awesome black folks and do something about the 300-year-long oppression. Thank God. Though, their efforts didn't go forward without major opposition from a large population of white Americans - assholes who finally decided to take their efforts underground so as not to come off as real jerks in the global eye. However, they're coming out from under their rocks to, yet again, express their open disdain for another group of brown folks ... Hispanics.

Seriously, if it were, say, a bunch of French-Canadians ... wait, no, because white Americans despise all things French as well. Okay, let's say a bunch of regular Canadians were coming into the US to work landscaping jobs or harvest fruit and veggies - a bunch of regular white Canadians - do you think there'd be such a fuss about building a wall to keep out the Canadians? Nope. All the whiteys would be happy as pigs in poo to have their northern brethren coming down to cut grass and pick fruit. But that's not the case with the Mexicans. Nope. Mexicans are brown and therefore evil.

The list goes on and on and on. I mean, sometimes I really hate being white because I'm immediately associated with one of the most dominant groups of ducktards the world has ever known. Yep, white Americans even make things crappy for other white Americans. Jesus.

ADDENDUM: After reading this post, a friend of mine pointed out something interesting in line with this whole "white Americans suck" thing. The majority of the creeps caught on To Catch a Predator are "religious" white males ... wow http://www.youtube.com/watch?v=EwFr_VcGMKQ
Posted by Unknown at 10:42 AM